The ‘Cottonian,’ the annual student journal of Cotton University, has already reached the milestone of hundred years of its existence in 2022. The journal was first published in the year 1922 entitled  ‘The Cotton College Magazine’ under the editorship of Professor R C Goffin of the Department of English. It became ‘Cottonian’ in the year 1933 with Suresh Chandra Rajkhowa and Raihan Shah as first student Editors. Since then the ‘Cottonian’ is being published regularly in every academic session and has gradually been able to grab attention from the internal stakeholders as well as the intelligentsia of the state. And thus this University journal has founded a strong platform for the young minds with creative urge to exploit their talents in the field of art and literature and becomes an expression of dreams and realities of the younger generations. It is a rare instance to cite the name of a student journal of a University along with the epoch making frontline journals of the state considering its magnitude of contributions to mainstream literature and society. This is worth mentioning that the ‘Cottonian’ was not published for two different occasions; one in the year of 1942 owing to World War II and the other in 1980 due to the Assam Movement. In a significant move the ‘Cottonian’ has been registered and assigned International Standard Serial Number (ISSN 2394-1367) by National Science Library and ISSN, New Delhi vide letter no. NSL/ISSN/INFO/2014/2487 dated 30/10/2014.

The ‘Cottonian’ moves up to its present self-possessed stature by dint of the will and interest of a host of cottonians and the loving concern of the people of Assam for this first higher education institute in the region. The ‘Cottonian’ has proudly carried the legacy of featuring the maiden pieces of many promising writers who later became stalwarts of Assamese literature and culture and have ably put indelible imprints in the national arena. These litterateurs include Suryya Kumar Bhuyan, Bani Kanta Kakati, Jatindra Nath Duwara, Krishna Kanta Handique, Birendra Kumar Bhattacharya, Bhupen Hazarika, Mamoni Raisom Goswami, Bhabendra Nath Saikia, Homen Borgohain, Lakshminandan Bora, Hiren Gohain, Nilamani Phukan and many others. Witnessing different phases of evolution throughout its history, the ‘Cottonian’ has now attained a novel identity in this phase of its long journey as the University journal. Now the onus is on the University to continue the flight of the ‘Cottonian’ with the former spirit to bring forth fruitful solutions to any crisis in the society by means of intellectual discourse and thus recording the visions and voices of the present. This student journal, since its inception, being the mouthpiece of new voices has been donning progressive changes imminent in the society and has to put effort to balance the heritage and modernity in this vicious time of transformation. For ages, the ‘Cottonian’ has stood as a testament of time keeping record of the growth and transformations occurred in the different phases of history of the state and eventually initiated a culture of cognition aiming at creating an intellectually vibrant Assamese society. 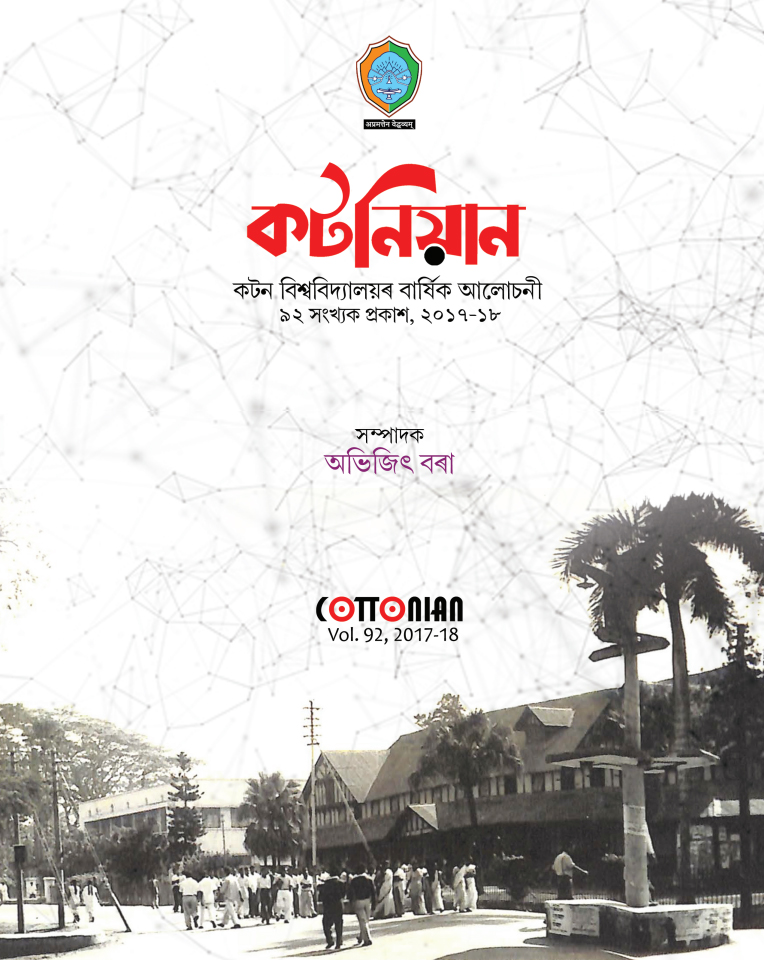